Today’s guest picture was sent to me by Bruce, who was visiting the Monsal Trail near Hassop in Derbyshire.  He says that it proves that there is light at the end of the tunnel.

There wasn’t a lot of light here today and with the temperature only rising to miserable 1 degree C, my plan was to stay in and do nothing.  Although I had had quite a peaceful night last night, a  couple of restless nights previously and a rather sore leg as the result of some recent walks helped me formulate this sound decision.

I did allow myself a short walk to the shop to get some milk and this was where the plan started to unravel.  I failed to allow for the correct opening time for the shop and so had to  make the trip twice.

Then I looked peacefully out of the window as the chaffinches defied the frosts to come to the feeder. 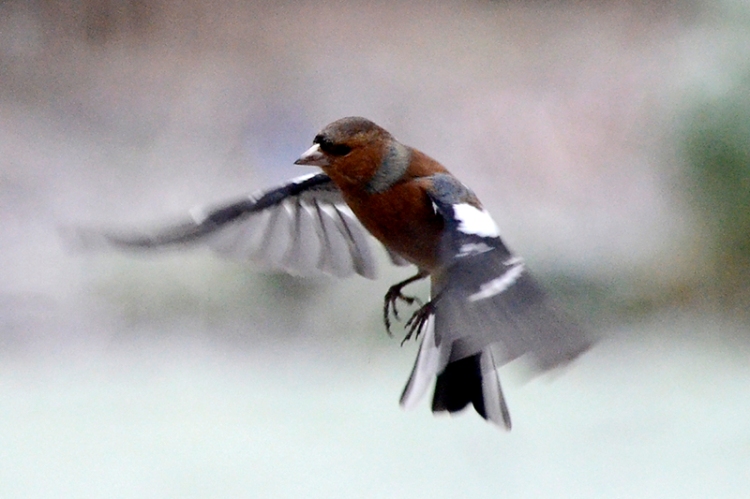 I put a week of the newspaper index into the database, spotted a robin in a bush…. 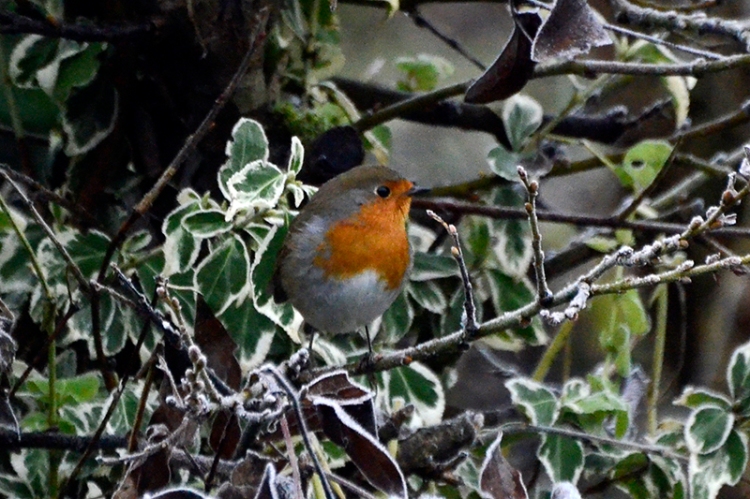 …and mooched around until lunchtime.  Then my resting schedule was disrupted again, this time by monumental boredom from sitting around doing nothing and Mrs Tootlepedal and I set out for a chilly walk round the Duchess Bridge and the Kilngreen.

I was experimented with using two walking poles.  I have been walking with one and I can probably get by with none at a pinch but it is sensible to  have some support for the knee. I found that using just one pole tended to induce some lop sided walking.  The two pole experiment proved that two poles were indeed the answer and a nice even walking gait was achieved.

The light was too poor to take pictures, except one of Mrs Tootlepedal scaling the summit of the bridge….

…but the paths were dry and ice free so the walk was a pleasure.  Once again though, we were in the right place at the right time to see a lot of hair ice all along our walk.  It looked as though almost every fallen small branch was covered with the frosty beard. 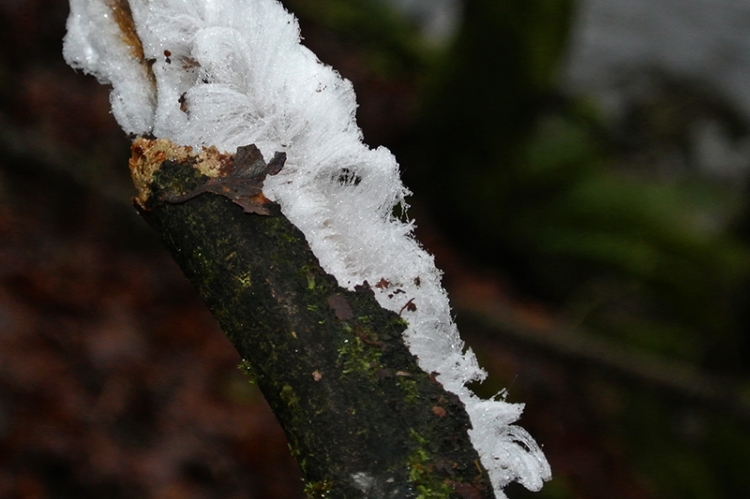 It was amazing as everywhere you looked, there was another patch of white among the fallen leaves. There were some very fine examples but as they would have required me to scramble up muddy banks to get close to them, I had to leave my camera in my pocket and walk past them.

We had crossed the Duchess bridge and were walking back down the Lodge Walks when Mrs Tootlepedal spotted the most conspicuous example of the whole walk.  A dead plant among a beech hedge was shrouded in hair. 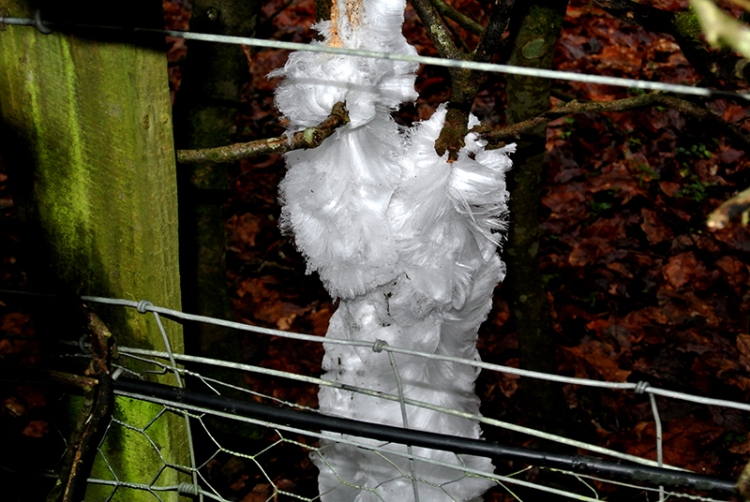 It was in such a gloomy spot that I had to use the flash to get the picture but it does give an impression of just what a tremendous sight this was.

I don’t recall ever seeing a sight like this before. Mrs Tootlepedal remarks, fairly enough,  that I never used to look at things much before I got a camera so I may have walked past sights like this many times without noticing.  But I don’t think I have.

Having already done far more than I had intended in the way of exercise, I settled down to a cup of tea and a slice of chocolate cake when I got back while Mrs Tootlepedal went off to visit a neighbour who is suffering from shingles.

Boredom is a bad thing though and after a proper winter evening meal of stew and dumplings, I was tempted to have a go on the bike to nowhere.  I had had to give up in pain after only two pedals the last time that I tried it and so was not very hopeful this time but I was surprised and pleased to manage 150 turns with no trouble at all.  If I can get a nice dry day, not too cold and with no wind, I might even try taking to the roads next week.

Mrs Tootlepedal went off to a concert of cheery orchestral music at the Buccleuch Centre in the evening.  I would have liked to have gone too but I didn’t think that my knee would enjoy being stuck in the same position for an hour or so at a time so I stayed at home.

All in all, although I didn’t get a day of rest, I had a very good day of exercise instead.  Mustn’t grumble.

The flying bird of the day is another chilly chaffinch.

37 thoughts on “Not quite as planned”