Mrs Tootlepedal is still away visiting her mother, whose hundred and first birthday is imminent.  This means that I am having to make up my mind for myself here with no assistance and this is quite wearing.  On top of this, I am getting rather fat because every time I wander into the kitchen to share an interesting thought with Mrs Tootlepedal, she isn’t there and I eat something instead.  Luckily she will be back next week and all will be well.

The forecast offered a dry morning and a wet afternoon so in an ideal world, I would get up promptly and go for a cycle ride and then do useful things indoors in the afternoon.

It turned out to be an ideal world.

I didn’t waste any time in the garden but got on the bike after breakfast and did thirty miles.  I stopped for one picture…. 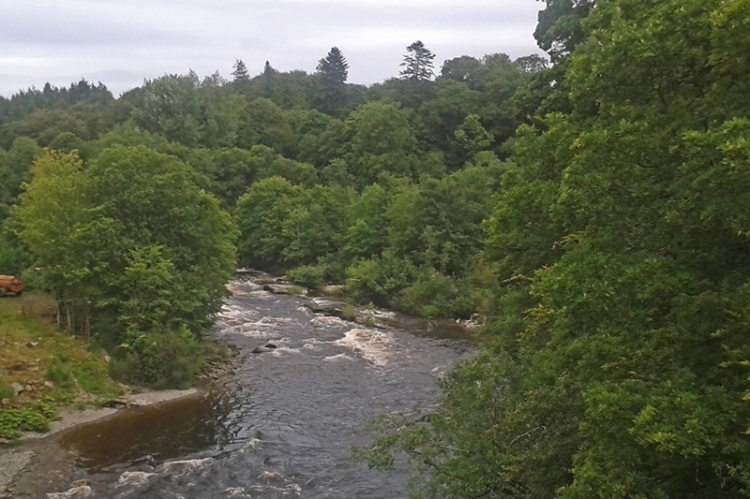 …just to prove that I had been out.  The wind was lighter than of late but the sky was grey so it was not a day for views.

I did notice when I got home that I had a serious outbreak of helmet hair which I have decided to share.  Nervous readers should look away now.

I flattened my hair down and mowed the greenhouse grass, did some poppy dead heading, cut down some plants which were beyond their sell by date and had a walk round the garden.

The poppies had appreciated the dry morning. 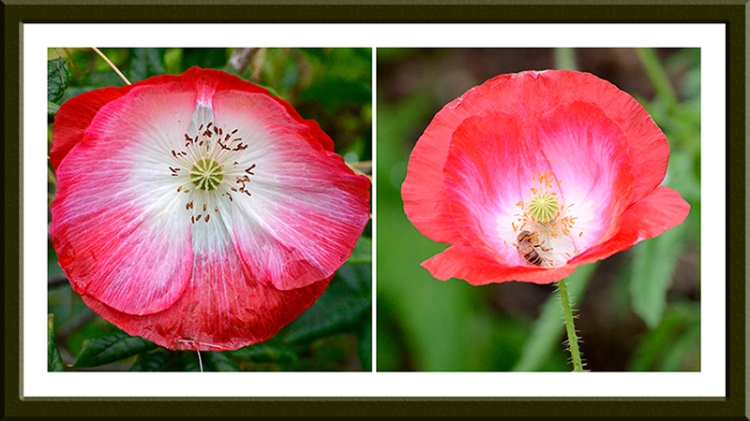 This was my favourite poppy of the day.

The should be a mixture of poppies and cornflowers growing round the front lawn but they are both taking their time thanks to the cool weather. Still, there are a few cornflowers about. 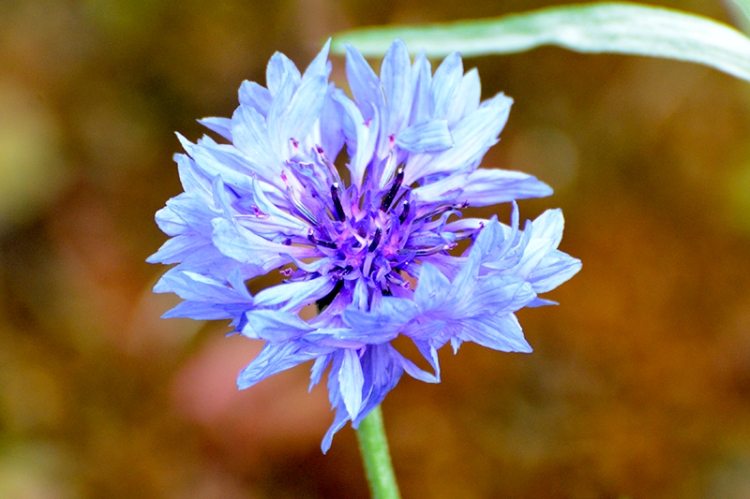 As I walked between the flowers and the compost bins during my tidying up, I couldn’t help but enjoy the jumble of white clematis and red rose on the arch through to the veg garden…

…and the clematis growing along the fence too.

If every flower has the same number of petals, there must be three different clematis growing there as I can see flowers with six, five and four petals in the picture.

Those rowan berries are in a neighbour’s garden.  Ours aren’t quite as ripe yet.

My neighbour Liz kindly took a surplus turnip off my hands and I picked some more carrots and beetroot. I am eating the beetroot at golf ball size and they are absolutely delicious as snacks.

After lunch, the forecasters’ predictions arrived in the form of a persistent spell of rain which lasted several hours.   I caught up on my correspondence and packed up the camera lens which I am trading in, having been offered a very fair price by the company which will sell me my new lens.  I then braved the rain and took the parcel up to the post office only to find the that post office was closed.

I brought the parcel home again and did some muttering.

Then I did some ironing …and a bit more muttering until getting a bit of advice from the ‘Call Mrs Tootlepedal Hotline’.

I had corned beef hash for my tea and was pleasantly surprised to find that our new potatoes taste very good when mashed and fried.

Recently I have had a choir to go to on a Wednesday night but that has finished now so finding that the rain had stopped, I filled in the time by wandering aimlessly about.

The bed at the end of the drive gave me a cheerful farewell as I left the garden. 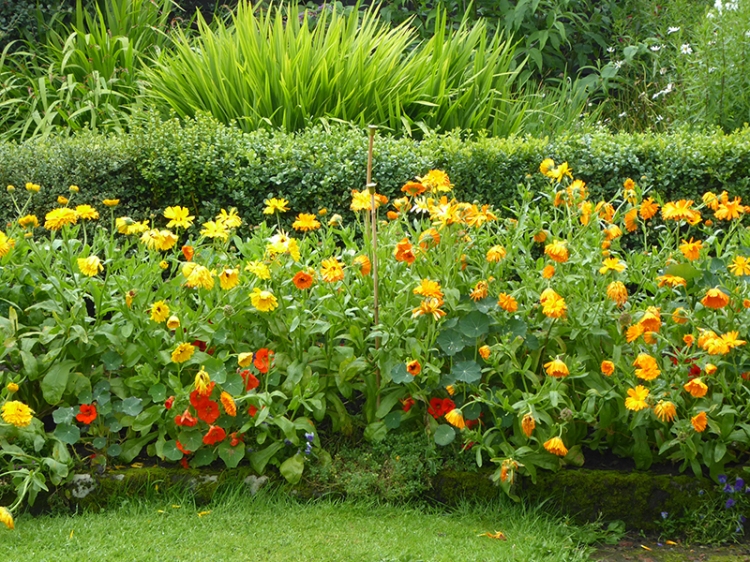 For some reason, the rather grey light seem to suit the church so I stopped being aimless and pointed the camera at it as I passed. 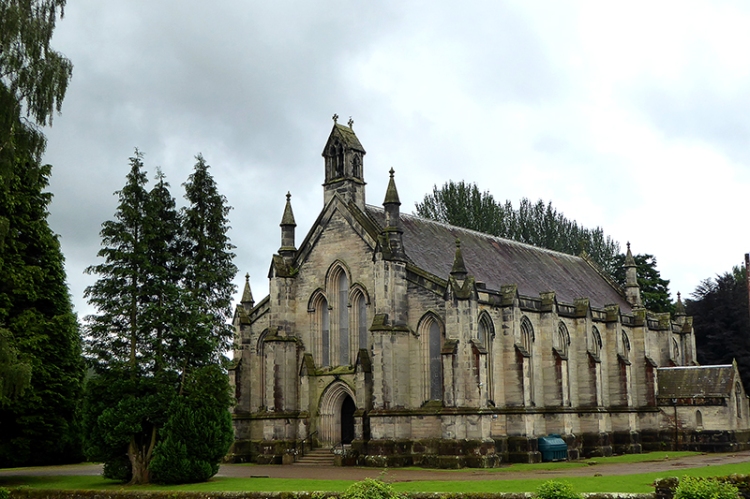 Our usual mallards have been joined by several darker ducks with bright white breasts this summer.

A little research tells me that they are probably mallard hybrids rather than anything more exotic.

…and thought that a bunch of ragwort on the bank of the Esk just above the Meeting of the Waters added a nice touch to the scene. 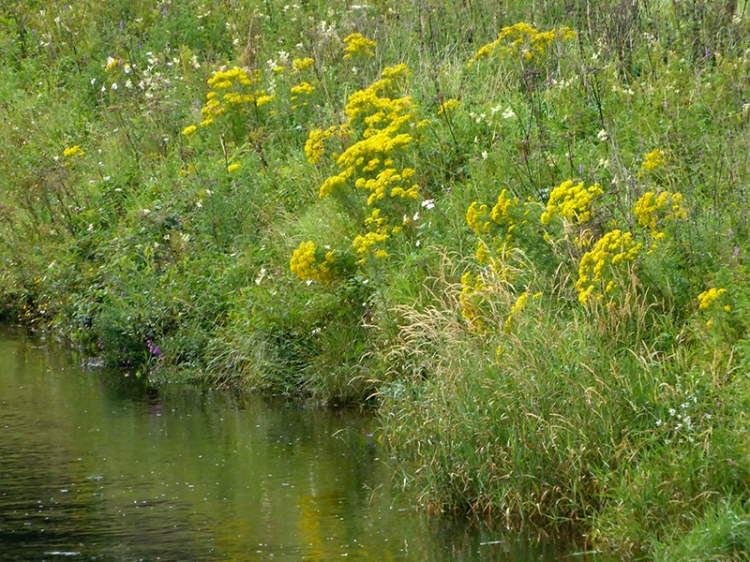 I was pleased to find that there was still a banded snail or two on the stump of one of felled trees along the Lodge Walks. 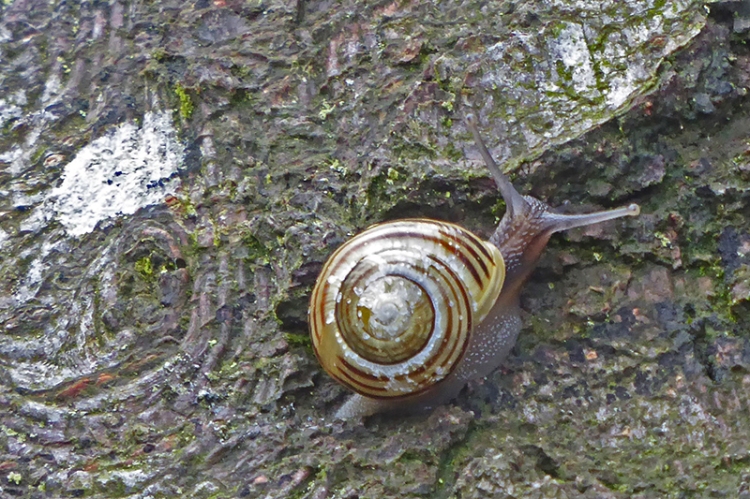 Although the evening was fundamentally grey and it looked as though it might well rain, every now and again a shaft of sunshine illuminated the scene….but always a little bit away from where I was.

But I got round dry and saw a most unusual thing on my way.

It was nearly seven o’clock by this time so perhaps all the insects had gone home to bed.

My last picture was a pleasing tangle of grasses. 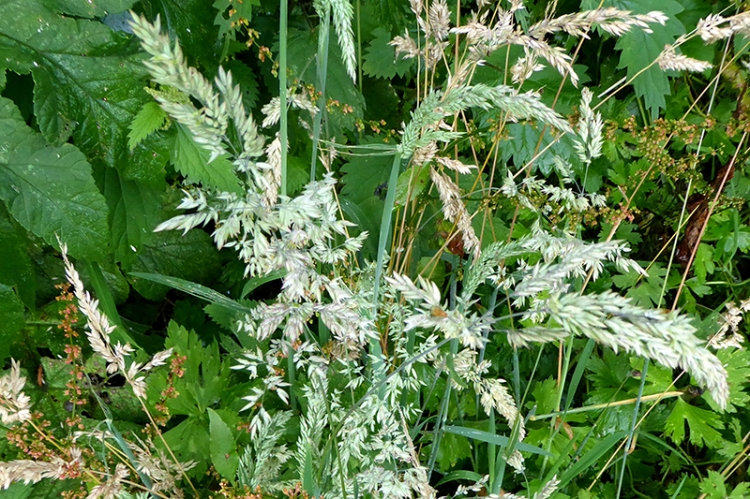 No flying bird of the day but there is a very badly painted blackbird and a splashy sparrow.