I was looking through my files when I found today’s guest picture.  It shows a Liverpool gull hoping to get Bruce to open his hotel window and give it a snack.  It was taken before Bruce went off to Helsinki.  He gets about a lot. 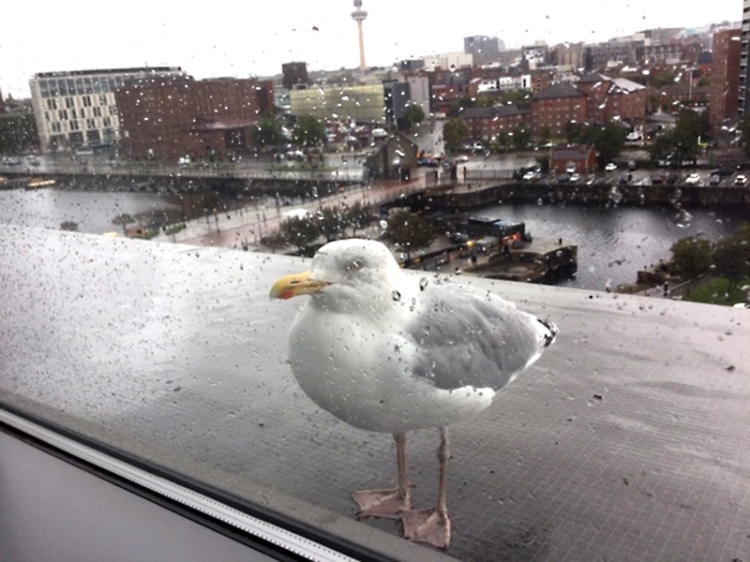 It was sunny and windy here today but as there was no rain all day, we liked the sun and ignored the wind as far as we could.

I had a generally relaxed day with coffee and conversation in the morning, a battle between bicycle and breeze in the afternoon and some top quality blues music in the evening.

The coffee and conversation was in the company of Dropscone who had brought some treacle scones with him in a traditional fashion.  He had been playing golf yesterday but as he missed a one foot putt rather carelessly at one point, he was not as happy about that as he might have been.

When he left, I had a walk round the garden and was pleased to see a bee visiting. 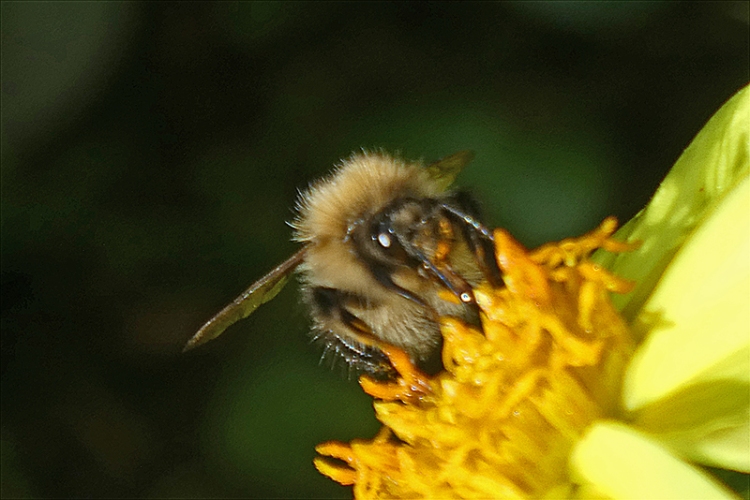 The butterflies have gone but there are still occasional bees.

I picked up quite a lot of walnuts.  They are not hard to spot. 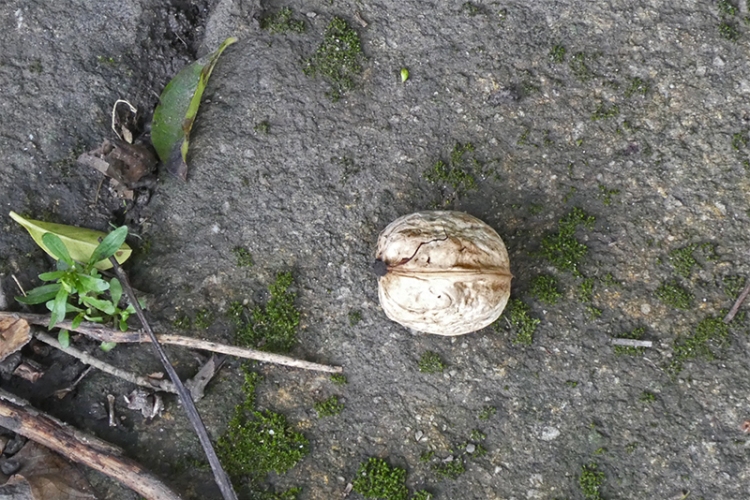 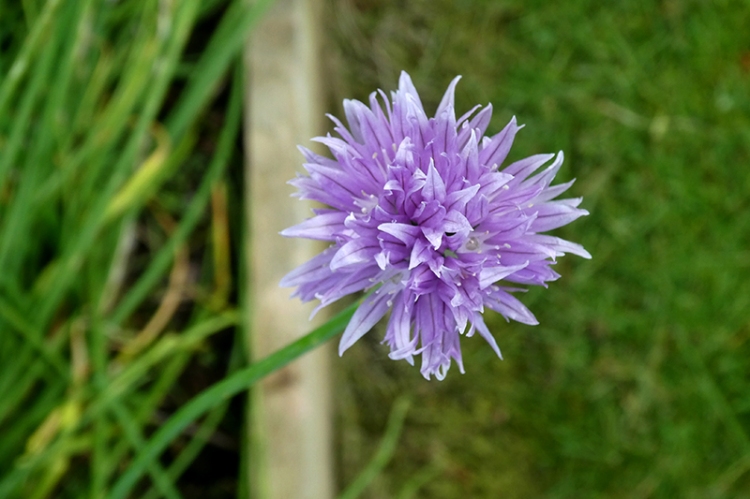 …and I looked up to see a starling on the holly tree,  I like the way that starlings look as though they are covered in hearts. 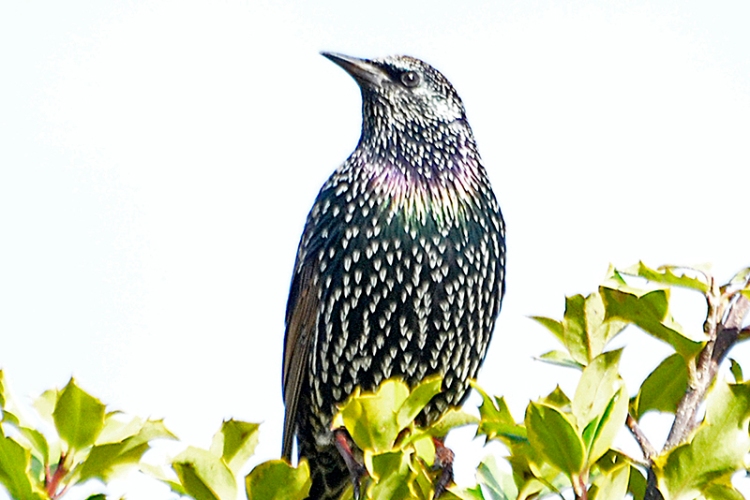 I went to inspect the middle lawn and noted the number of fuchsia flowers still waiting to come out in the bed beside the lawn.  We have got another week before a frosty morning is forecast so they still have time. 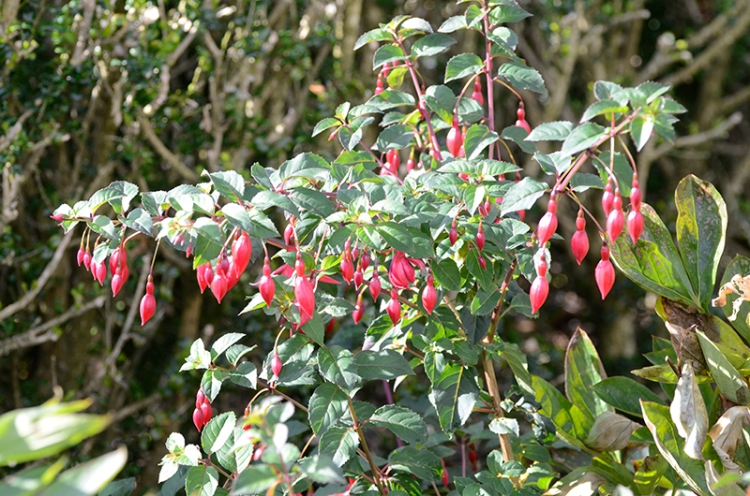 The middle lawn looked as though it might need a cut as the grass has started to grow again after I thought that it had decided to stop for the year.  A sparrow caught my eye as I went to get the mower out… 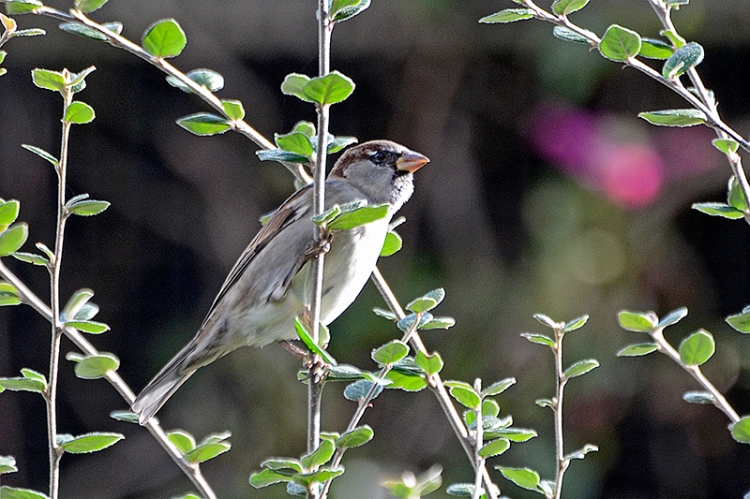 …and there turned out to be enough grass to make it worthwhile to mow the lawn.  I sat on the new bench and admired the result. 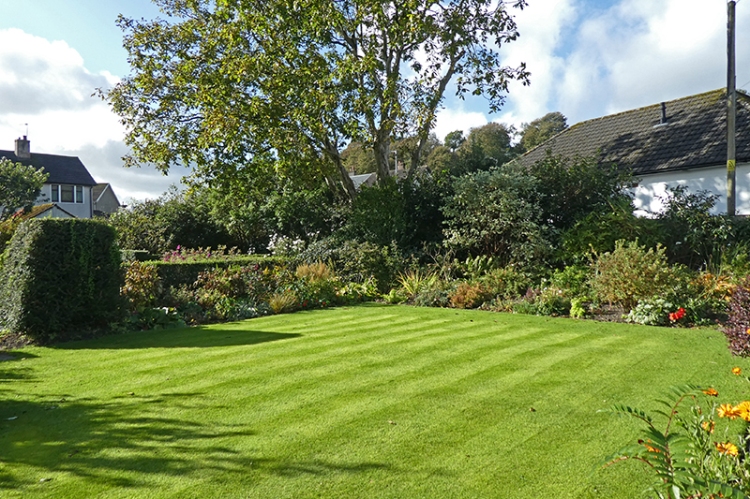 As I sat there, a bee visited a nicotiana beside me but it got stuck in so thoroughly that there was no trace of it when I looked.  It came out too quickly for me to catch but then flew down on to the ground in front of me and posed for a picture. 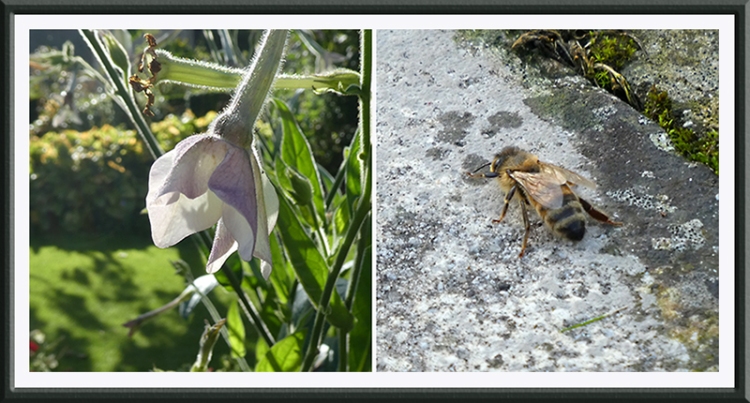 There is a small but colourful corner next to the bench. 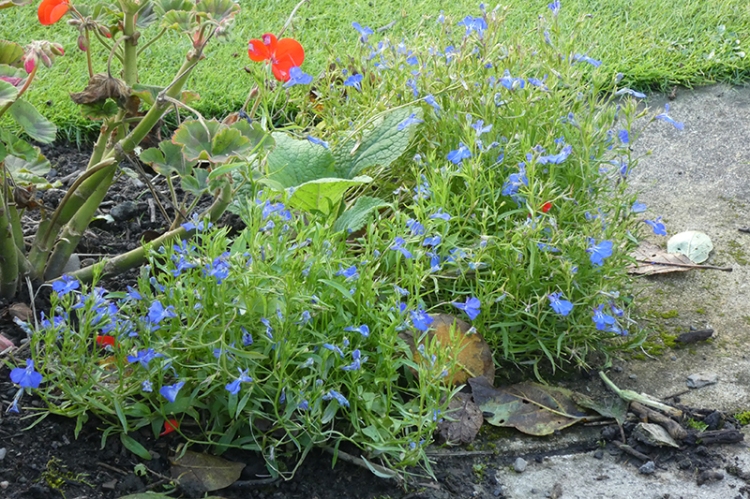 I went in and used the leek to make some soup for lunch.  Mrs Tootlepedal had made some wholemeal bread yesterday and it went very well with the soup and some cheese.

After lunch, I went out for a cycle ride.  I had ambitions for a ride of thirty or thirty five miles in the sunshine but after spending half an hour battling into a wind gusting up to thirty miles an hour, I turned left and headed down to Canonbie for a twenty mile circuit with the wind mostly across or behind.

I was too busy pedalling to take pictures until I got the wind behind me at Canonbie. 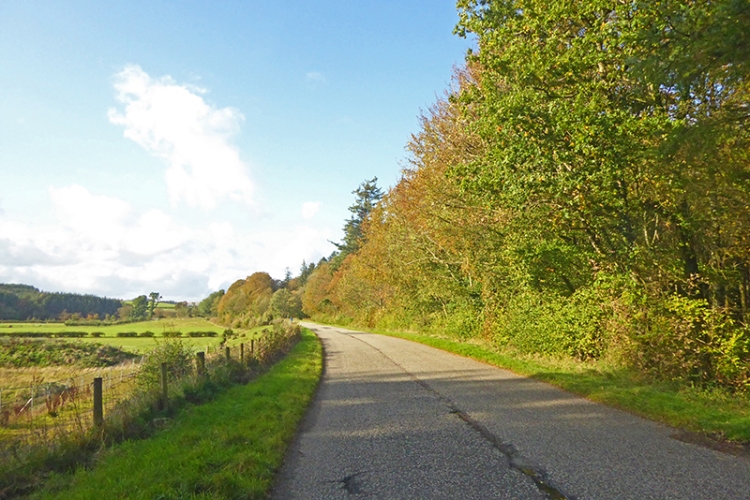 Apart from the breeze, it was a lovely day for a pedal and the trees along the Esk at Byreburnfoot looked very seasonal. 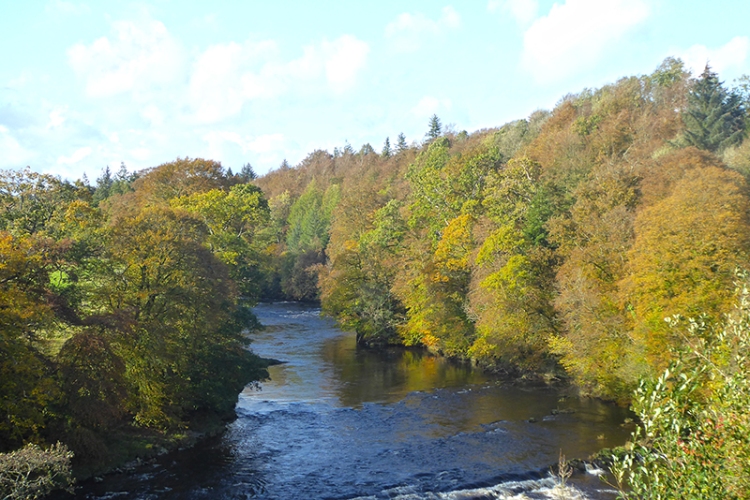 There is a little patch of grass where I stood to take the picture above and for some reason, it is a great place for fungus every year. 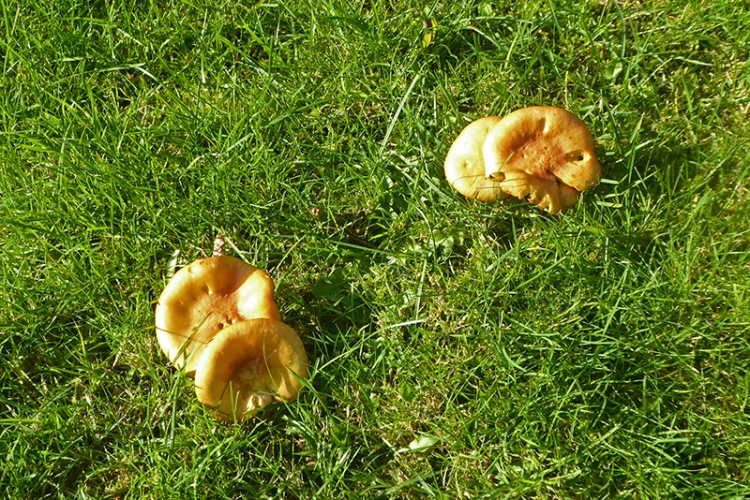 I often wonder what is buried beneath it.

My Canonbie route takes me along two sections of the old main road.  This section at Hollows was by-passed when half of the road fell into the river nearly forty years ago. 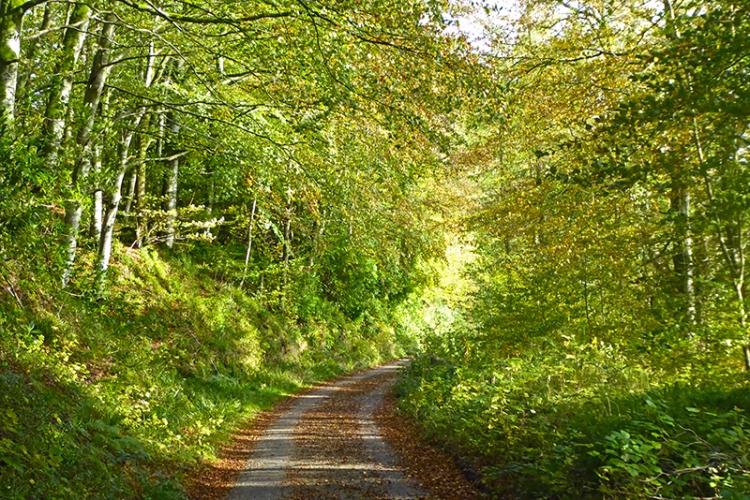 And this section at Auchenrivock was bypassed more recently when another section of the road slid into the river.  I took a poor picture of it but have put it in anyway to show local readers that they are cutting trees down here and the tarmac is seeing the light of day for the first time for ages. 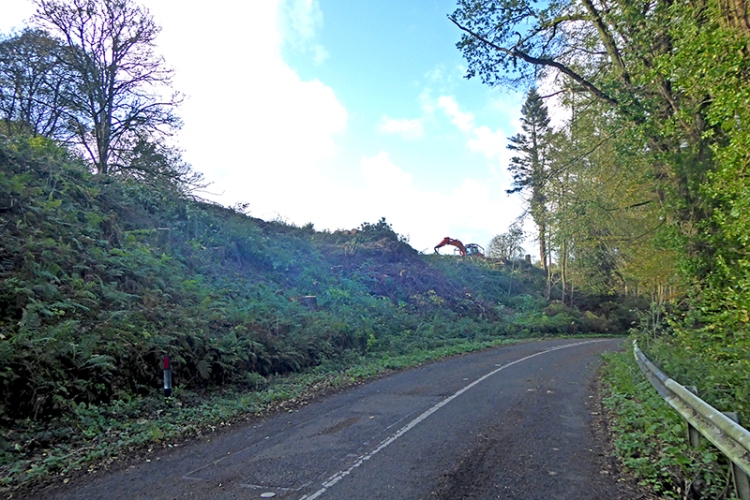 The tree felling is near Irvine House. 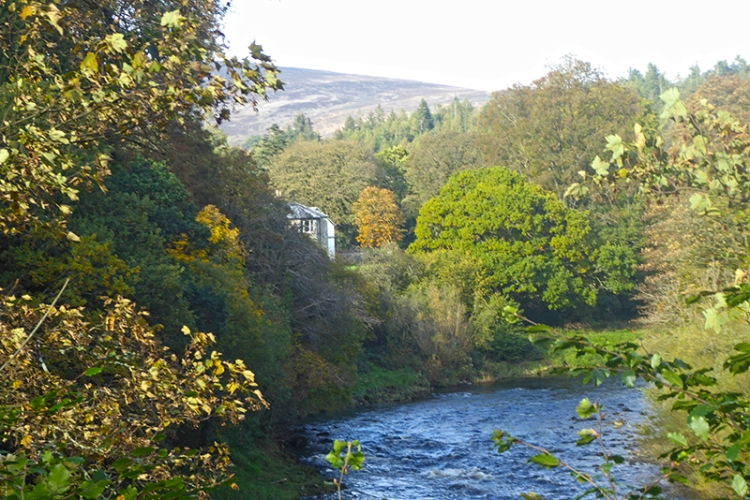 I stopped at Skippers Bridge and thought that the steps that the Langholm Walks Group put up for Walk 7 looked very inviting.. 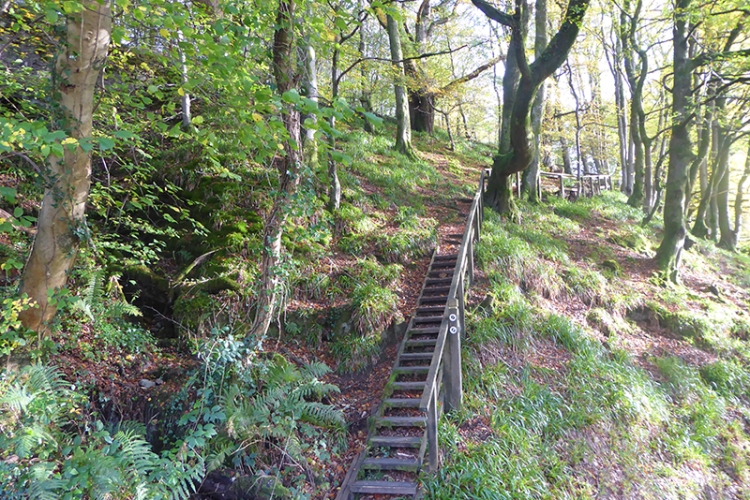 …but I didn’t walk any further than down to the waterside to look through the bridge at the old distillery. 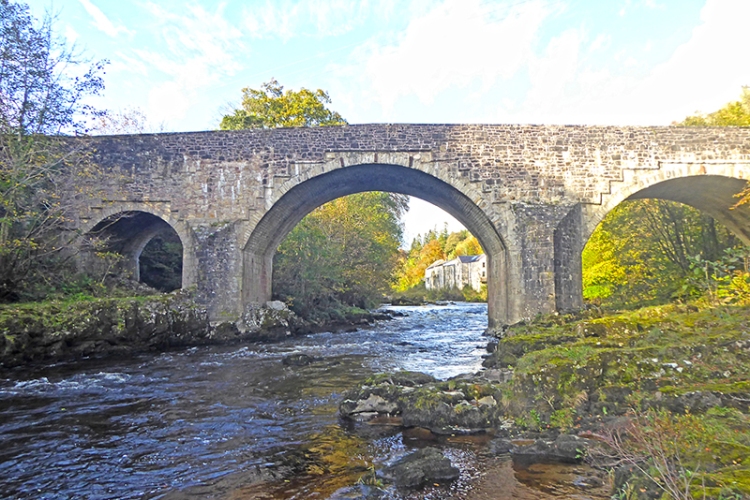 When I got home, I found Mrs Tootlepedal grappling with a very intractable website which required several codes to be entered to gain access to it.  Unfortunately, however many she put in, none seemed to be able to unlock the door so she gave up in despair and made me a cup of tea (and a slice of wholemeal toast) instead.

I went out for look round the garden and decided that the front lawn might need a mow too, so I mowed it.  It turned out that it didn’t really need a mow as it get less of the sun as it gets lower in the sky than the middle lawn and I didn’t get much grass off it at all.

I took a picture of one of our most long lived flowering plants, the ornamental strawberry which has been in flower since the beginning of June… 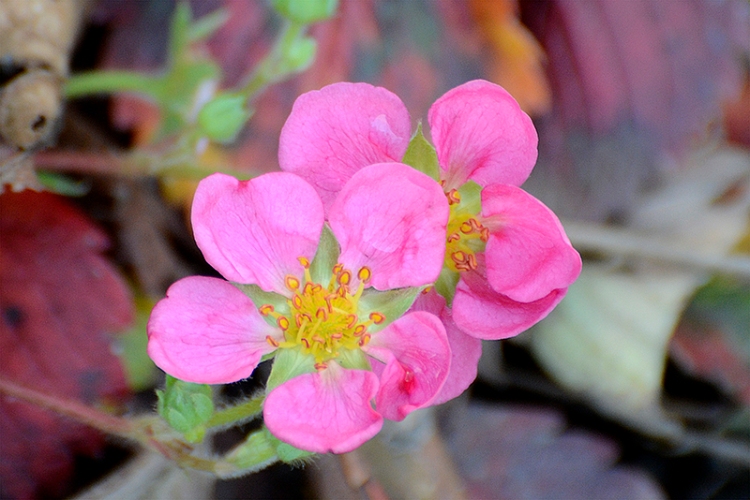 …and then went in to have a shower.

After a meal of ham and eggs, I left Mrs Tootlepedal to watch Gardeners’ World and walked down to the Buccleuch Centre to attend a concert of mostly blues music sung and played by Maggie Bell and Dave Kelly, veterans of the British music scene.

It was a most enjoyable evening and I especially admired Dave Kelly’s guitar playing.  (You can hear a sample of his work here if you wish.   It sounded much better when he played it live tonight but it gives you an idea of his skills and style.)

The flying starling of the day is not showing off its wings for once. 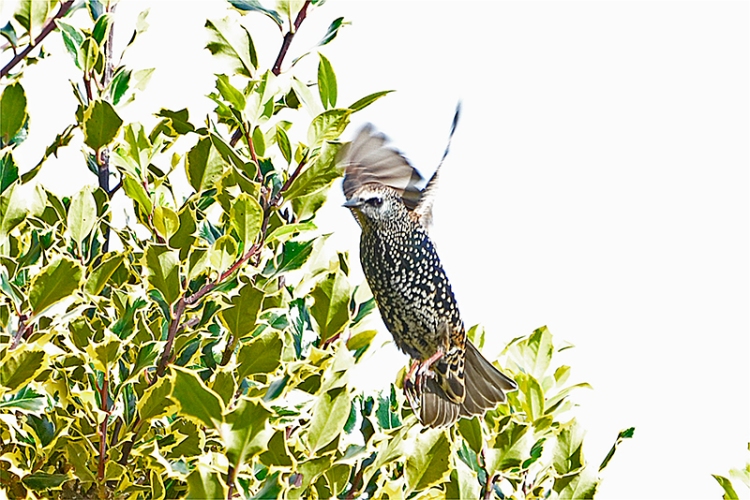