Today’s benchmark. By the end of the day we had 5 inches of snow but the end may be in sight.

It was another day of sunshine and snow showers with no bicycling, not even in the haven of the garage. To make up for this, I was fortunate enough to entertain Dropscone and Arthur for coffee and gingerbread.  After some elevating conversation, we said goodbye to Dropscone, who left with a promise of home baking for tomorrow, and Arthur and I set about recording the material on spinning for the DVD. Making textiles turns out to be an uncommonly complicated process and I am learning a lot about it. I am also learning about recording and editing DVDs. Unfortunately it is one of those things that the more you find out about how to do it, the more you find out how hard it is to do really well. In that respect it resembles recorder playing.

I leapt up in the middle of coffee to snatch a shot of a new feeder combination, great tit and greenfinch. In the end however, I caught them both separately later on.

On his way over for coffee, Dropscone had been attracted by the sight of our marble man with a snow hat on. 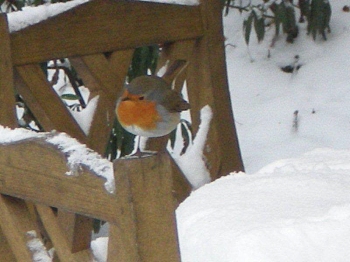 And at much the same time, my sister Mary, who has now got to grips with the practice of zooming, found this little robin just asking to be photographed on her morning walk. If she goes on like this, she will have to acquire a photo editor for her computer. I use mine all the time to improve my shots.

I am quite well off for visiting photos at the moment as my oldest sister, Susan, has just posted a picasa album from their recent holiday in Bruges (there was no violence). I show one picture below but to see the whole album click here. 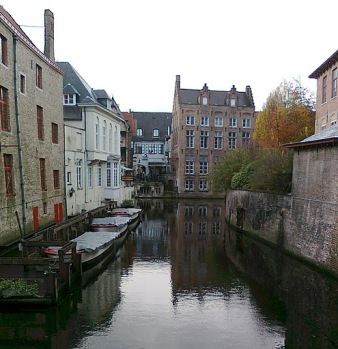 My sister is an inveterate traveller and in the last month has been to New Zealand, Greece and Bruges. It makes me feel quite pale to think of it but she seems to thrive on it.

While we were drinking our coffee, we were visited by an unusual cloud of birds because Mrs Tootlepedal had put some breadcrumbs out on the ground.

They had eaten the crumbs up in a moment and then were off to their next scavenging feast.

Our usual visitors were not put off by this invasion and joined in a co-operative and concerted attack on Mr Ritchie’s and Monique’sbird food. There’s a starling, goldfinches, sparrows and a chaffinch in there as well as an unidentified flying abject just above the starling. (Probably a sparrow)

In this one there’s two greenfinches, a blue tit and a starling. I never get bored. 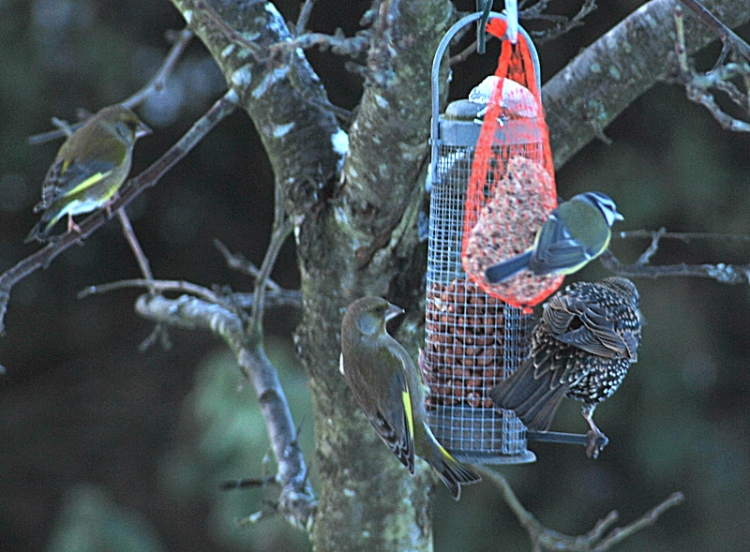 One bird that is looking a bit miserable is Mrs Tootlepedal’s chicken. I don’t think it likes the cold weather very much. It certainly isn’t laying any eggs. 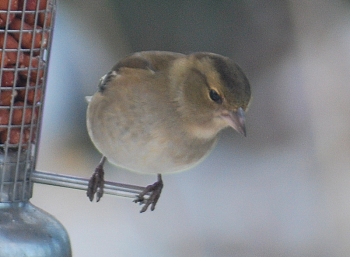 This sparrow (I hope it is a sparrow, Dr Barlow) seems to be in quite good condition though.

In the afternoon, Mrs Tootlepedal went off for another of her walks but refused to take her camera with her so I have no pictures to show for it. I worked some more on the DVD recordings.

In the evening, I got a lift with Sandy to the Archive Centre. With his help I indexed a page of a microfiche of the E&L which involved two huge lists of names, one of schoolchildren and the other of Horticultural Show prizewinners. We followed this up with two pints of Deuchars at the Douglas. They went down without any noticeable pain at all.

I finish with two more feathered friends as I believe they are technically known. 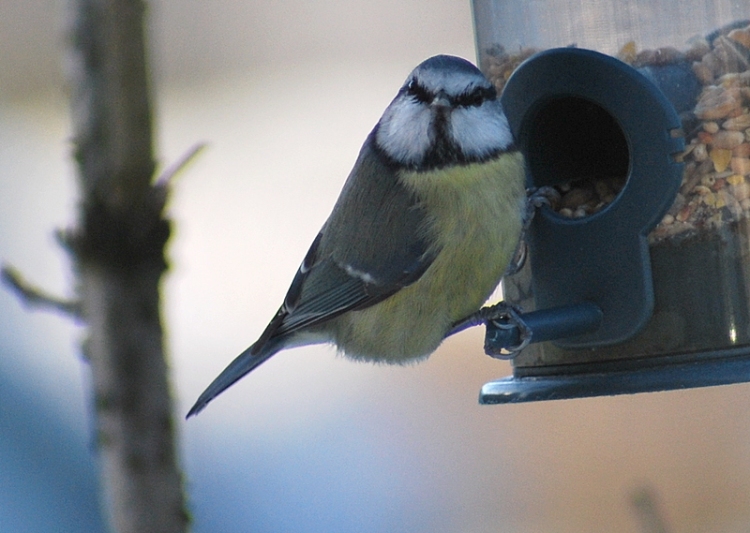 and a glimpse of the purveyor of most of my bird seed.