Today’s guest picture comes from my Somerset correspondent, Venetia.  She visited the Hillbrush factory which has a factory shop which sells brushes but not, as far as I can see, hills.

We had a day of mixed weather and doubtful intentions.

The weather in the morning was frequently wet… 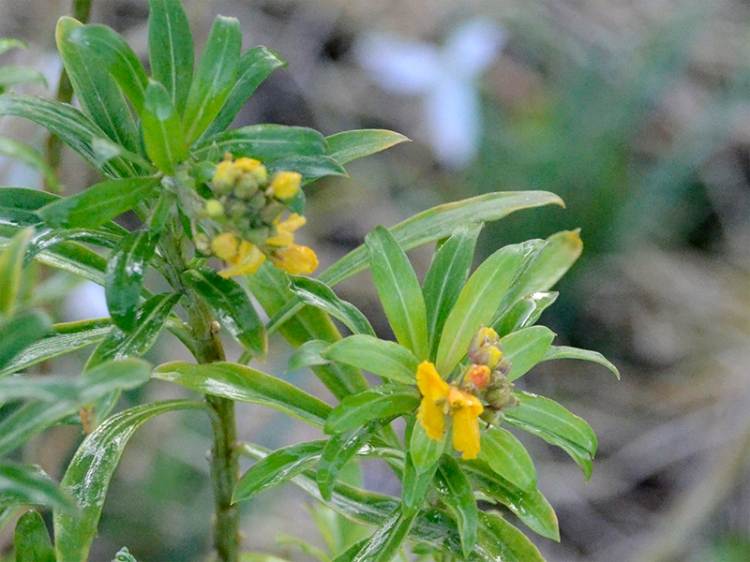 It had been our intention to go to Edinburgh to meet our son Tony and his partner Marianne and her children Tash and Dylan, followed by a visit to allow Evie to meet Matilda and her parents.  The unreliability of the weather and the railway system coupled with a slight illness on the part of Matilda made us consider and reconsider these plans several times.

While we were deliberating, I watched the birds and there were plenty to watch today.

…a warm welcome on a cold day….

…and a quick pause in a dry moment to see if there was more frogspawn in the pond.  There was.  The frogs have been very quiet about it as I haven’t heard them croaking at all. 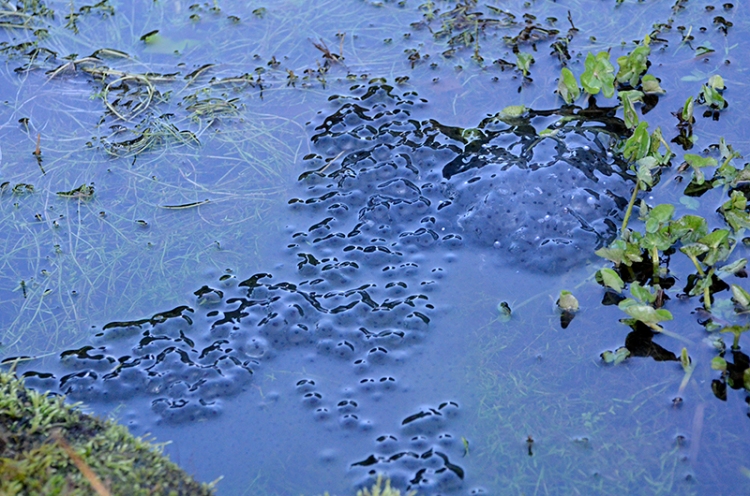 Wallflowers are coming out,

And the daffs have stayed upright in all weathers.

A redpoll, in its spring plumage, stood above the fray…

..but popped down for a snack when the chance offered.

In the end, our daughter Annie made the sensible suggestion that we should catch the train to Edinburgh from Carlisle and not Lockerbie or Tweedbank. This gave us the prospect of a safer drive, two railway companies to chose from in the event of delay or cancellation and more trains to come home on earlier if Matilda was not up to a visit.

We took her advice and it was good.  The drive to Carlisle went without a problem, with no sign of flooding on the road, although there was a lot of flooding by the river in Carlisle.  The train was on time, with plenty of seats and a very cheerful and helpful set of staff members….and Matilda had recovered from a brief spell of high temperature.

We arrived on time and enjoyed a good meal with Tony, Marianne, Tash and Dylan. 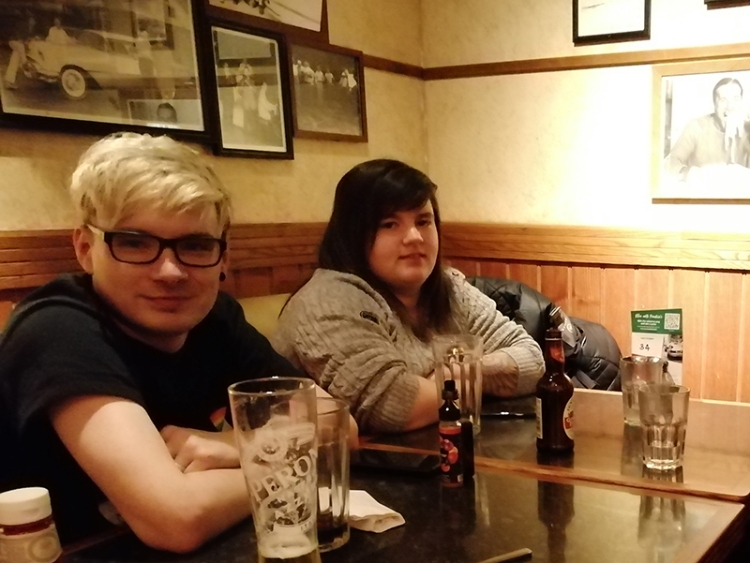 …had not met Evie before and were pleased to make her acquaintance.  We were pleased to catch up with them and hear their news.   They are both working hard in satisfactory and satisfying jobs and that is something to be warmly welcomed these days.

After lunch, we did a little shopping for baby clothes for Evie in a well known store, braving some very nasty sleety and windy weather for a few minutes on the way.

Fortunately the weather had eased by the time that we came out of the shop and we walked down to Matilda’s, pushing Evie in her push chair.  Matilda was waiting at the door to welcome us and when we had settled down, she carefully built a large tower to entertain Evie.. 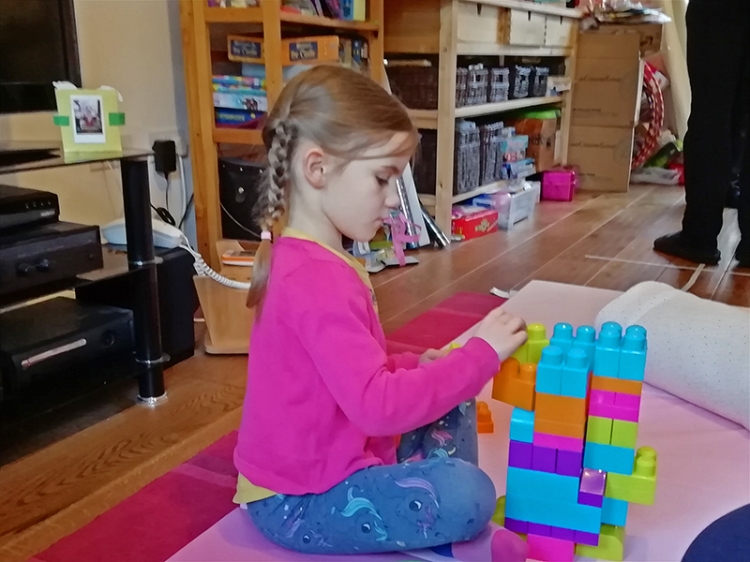 …. and then equally carefully helped Evie knock it all down again.

Matilda was in great form and really enjoyed meeting Evie.  She kindly showed us the latest dance and gymnastic routines she has learned and we left reluctantly to catch our train home.  The weather let us walk back to the station in the dry, although the biting wind made our progress as difficult as it could.

All the same, we got to the station in plenty of time, found our train, were greeted by more cheerful and helpful staff members and arrived back in Carlisle, dead on time.

We got into our car in the station car park, congratulating ourselves on the smooth running of the day, switched on the power and were greeted by a notice saying in big red letters:  “STOP, electric motor failed.”  And indeed the car would not move an inch.  To cut a long story short though, having contacted our rescue service and summoned assistance, I tried the engine again some time later and it worked perfectly.  Rescue service and assistance were recontacted, and we drove ourselves home without a problem….except for a slight sense of stress.

It was still a very good day out though.

The flying bird of the day is a siskin.  It is not a great picture but I put it in to show that wherever a siskin is, there is almost always a flying piece of seed as well.  They are the world’s messiest eaters. 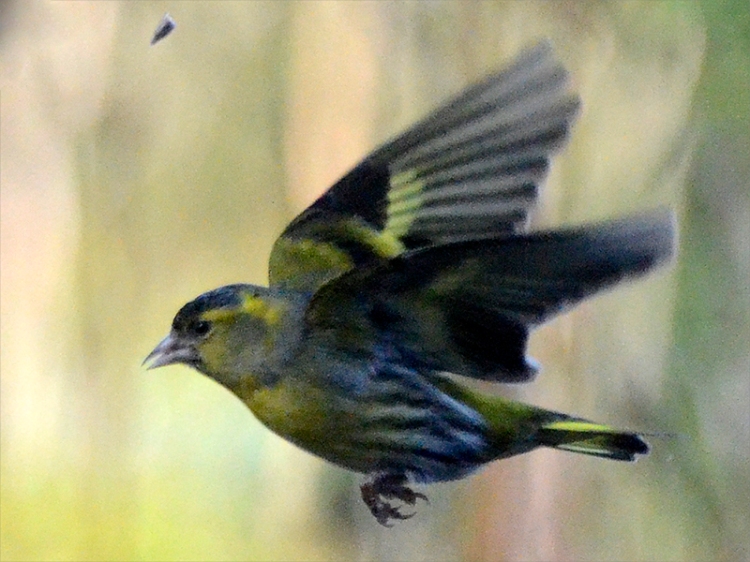 Footnote:  While Matilda is an old hand on social media, Evie does not yet have an internet presence so readers much just imagine a fine looking seven month old infant with a winning smile and impeccable manners.